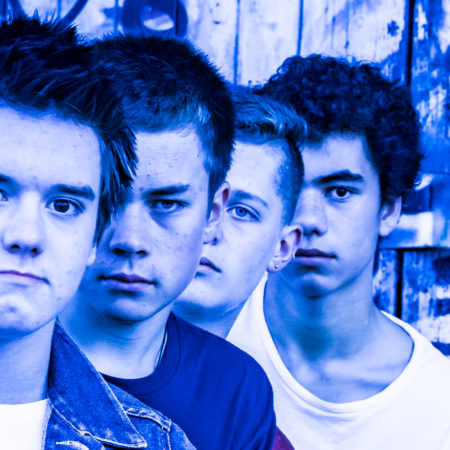 Sit Down In Front

Since forming in January 2017, The Gisborne Punk-Rock band Sit Down In Front, whose members are all still in high school have been impressing fans in Aotearoa and abroad.

The four-piece is comprised of; frontman and lyrist Cory Newman (16), who uses a wheelchair due to his Cerebral Palsy, guitarist Jackson Clarke (16), bassist Roman Benson (14) and Rikki Noble (16).

They self-produced their 2018 debut album Red Light Runner in the small-town of Wairoa, New Zealand, the first single from the album 'Runaway Chair' quickly racked up over 45,000 streams on Spotify. After placing first in the 2019 Smokefreerockquest East Coast regional final they went on to be placed third nationally in the band category of Smokefreerockquest and since have performed and toured Aotearoa with some of their favourite artists including Jimmy Barnes, Cold Chisel, Villainy, Aussie shed-rockers The Chats, Skinny Hobos, John Toogood, The D4 and Head Like A Hole. Sit Down In Front closed out a successful 2019 with a performance on the Garden Stage at Rhythm & Vines.

Their second album Confessions Of A Pie Thief set for release June, 26th 2020, was recorded at Roundhead studios under the expert guidance of renown International producer Greg Haver (Manic Street Preachers, Opshop, Feelers). The two singles from the forthcoming album ‘Rain’ and 'What Comes Around' featured on the New Zealand Rock Radioscope Charts, 'Rain' received mainstream radio play in Brazil and across college and community stations in the United States and Europe and was streamed in over 72 countries in 2019.

Sit Down in Front’s brand of rock is built on the foundations of classic punk rock, they successfully capture the essence and energy of the old while creating their own, new, exciting, youthful sound. Lyrically the album centres around real-life situations, straightforward songs about stealing pies from the school tuck shop, karma, burning sausages on the BBQ or just having a bad day. Collectively, the band are inspired by a wide range of genres from the 60s rock of the Rolling Stones and Beatles to punk bands like Sex Pistols and Green Day to the modern-day rock of Foo Fighters and Rage Against The Machine. New Zealand artists, Villainy, Shihad, Devil Skin, and Alien Weaponry have also all had a huge influence on the band growing up.

“Never in my years as a tour photographer have, I witnessed a crowd reaction to an opener like I did last night. Sit Down In Front finishing their set at the Powerstation to a screaming crowd wanting more. Shouting for one more song..” - Chris Morgan, Photographer, (Villiany, Powerstation)